The Popcorn Box: The Bridgewater Triangle: A Review 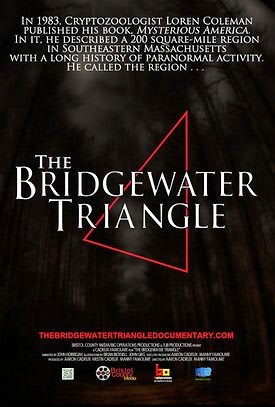 When it comes to documentaries that chronicle bizarre occurrences, paranormal themes, and tales of the weird, you know you can count me in. All too often, however, I’m left feeling disappointed by what’s out there.

Much like the majority of film making today, documentaries of this genre all follow a similar blue print. There’s usually a housewife sitting in her kitchen describing what it was like hearing footsteps move from one room to the next, finally stopping in her young son or daughter’s room. She describes the cold spot that was associated with the disturbance and how she could hear her son or daughter talking to someone who wasn’t there. This is usually followed by the inevitable dramatization of what happened, and Good Reader, don’t you know that it will be filmed in slow motion?

The Bridgewater Triangle comes bearing some of these hollow gifts. At least at first.

In 1983 cryptozoologist, Loren Coleman, published a book entitled, “Mysterious America,” in which he dubbed the triangular area of southeastern Massachusetts that stretches from Abington, Freetown and Rehoboth, the Bridgewater Triangle.
The reported sightings that have come out of the triangle include everything from bigfoot, thunderbirds, demon dogs, UFO’s, ghosts of all shapes and sizes, and malevolent nature spirits that can lead even the most experienced trail blazer astray. There are some who even argue that an old Indian curse was placed upon the land, and started the whole thing off.

A few weeks ago, our local cinema announced that they would be screening the film and that some of the crew would be present for a Q&A session afterward. Needless to say, I bought my ticket and was off to the show.

The filmmakers did a passable job of trying to cover as much as possible, though the early half of the film lost some footing with over-dramatized spirit interactions and some assumptive eye-witnesses that seemed damn near fanatical.

In one instance, a dramatization of a hitchhiking ghost had the audience in stitches. All I’ll say is that the ghost bore a striking resemblance to a pervasive trend that makes me cringe. I’ll give you a hint, beanies, flannel, pants that are too small, and ridiculous beards. Still over the course of the film, the audience remained roped into the fact that the people on screen believed, beyond a shadow of a doubt, that they had seen something unusual.

Another plus for the film was that Loren Coleman was featured several times, discussing what drew him to the area and the research that he has subsequently done regarding the strange occurrences in the triangle.

It wasn’t until the latter half of the film, however, that shit got real and the audience stopped talking. Satanic rituals, human and animal sacrifice, blood, guts and enough archival news footage to choke a yeti, knocked the campy atmosphere of this film right on its ass. It didn’t slow the pace, but brought things clearly into focus. Crime scene photos were splashed across the screen, while an aging police officer that was on duty during the worst of it, discussed what it was like. He spoke candidly about his experience and a collective shiver ran through the audience. We saw still images of him as a younger man, during an investigation, kneeling on the forest floor at the site of one of the murders. Suddenly, everything we had seen up to that point didn’t seem so funny and far-fetched anymore. The audience was left with the bulk of the sum and it was heavy.

When the film ended, the house lights came up and there were a few seconds of chatter before I decided that I needed to be going. It was a late night showing, and I had a job to get to early the next morning.  As I began to rise, gathering my things, a sharply dressed older man emerged from the din, straightening his tie and being led hastily to the front stage. Here was our policeman from the documentary, in the flesh, to answer questions from the audience. The struggle not to leave was immense, but regrettably, I did. I’ll know better next time.

All in all, the Bridgewater Triangle rises above your average SciFi sponsored documentary. It has its moments of weakness, but remains true to its cause until the end. The sheer amount of reports almost seems unbelievable, but it makes one thing very clear . . . something is going on out there.

So, Good Reader, even if you don’t have the stones to investigate this place on your own, the Bridgewater Triangle is a compelling documentary that I recommend to anyone who enjoys the mysteries that can be found no further than our own backyards.

You can find the Bridgewater Triangle for sale here:
http://thebridgewatertriangledocumentary.com/